Well, with the weather being so nice again today, it seemed such a shame to keep the new girls indoors in their pen.  So, during milking, we opened it up so that they would get to meet all the other girls gradually as they came out of the parlour.  We left the pen in place so that we could move them back in if they looked as if they were getting a hard time.  We fully expected a bit of a punch-up as new goats have to find their place in the herd and we do have some stroppy old milkers who don't take kindly to strange goats in their barn!

But we needn't have worried.  All the new girls are pretty feisty and are perfectly capable of looking after themselves.  There was a bit of head butting and hard stares from Betty, Daphne and Thelma (some of our oldest goats) but soon everyone got bored and they all went outside to graze.

It was lovely to see the new girls outside.  Their old home did not have grazing - they just had a small outside yard to wander around in, so I think they were all a bit overwhelmed by the lush green field that awaited them.  They spent a lovely day wandering around in the sunshine, nibbling at grass and generally enjoying the sun on their backs.  Here they are in the yard between the barn and the field: 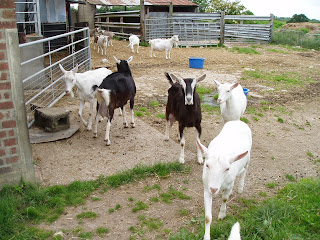 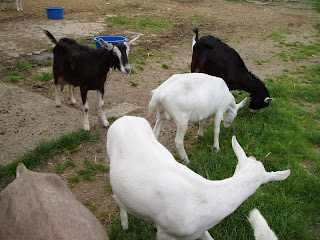 The two goatlings, Takira and Angelique, are inseparable.  They wander everywhere together as if they are joined by a piece of string.  Where one goes, so the other follows! 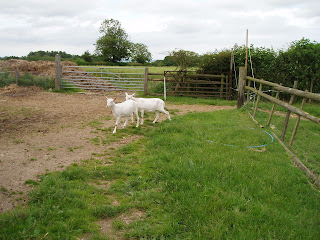 Even dear old Betty goat was outside for most of the day today.  She often prefers to lie around in the barn nibbling on hay but she was out there today with everyone else, although she did keep her distance!  Betty is in the centre of the picture - everyone else is out of shot to the right! 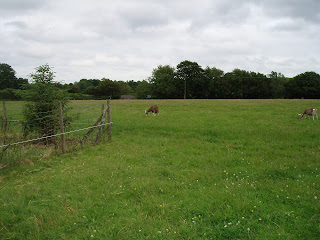 Meanwhile, in the barn, naughty kids were also having a lovely day, bouncing up and down all those straw bales.