Another busy week!  The weekends seem to come around so quickly these days .. and I have to say that the nights seem to be closing in very quickly!  Or is it just me?

It looks likely that most of our lovely goatlings will be moving to a new home near Hereford to start up a new milking herd.  They will be accompanied by most of our 2014 babies as well.  Fingers crossed that it all goes according to plan!

We already have around 200 milkers and don't really need to keep all of our youngsters at the moment, so it seemed a good idea to try and move them all on as a large group so that they settle in better.  More details nearer the time .. but marathon blood-testing is scheduled for Monday when our lovely vet Peter will come to do battle with them all!  Hopefully just a formality but we need to make sure that there is nothing nasty lurking in our goaties .. starting off someone else's herd is a huge responsibility that we take very seriously.

So, here's some of our lovely goatlings .. 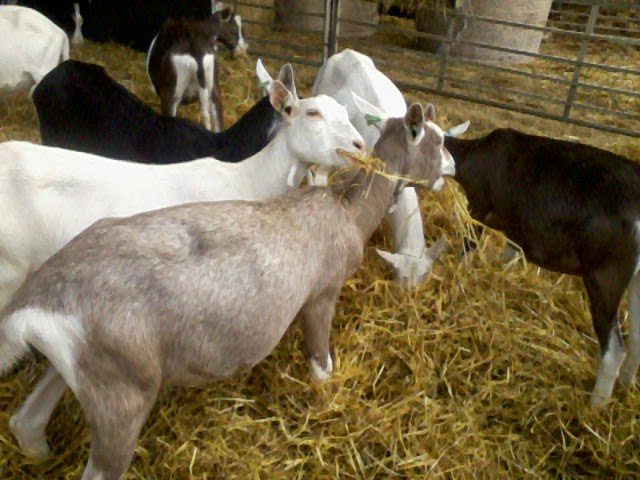 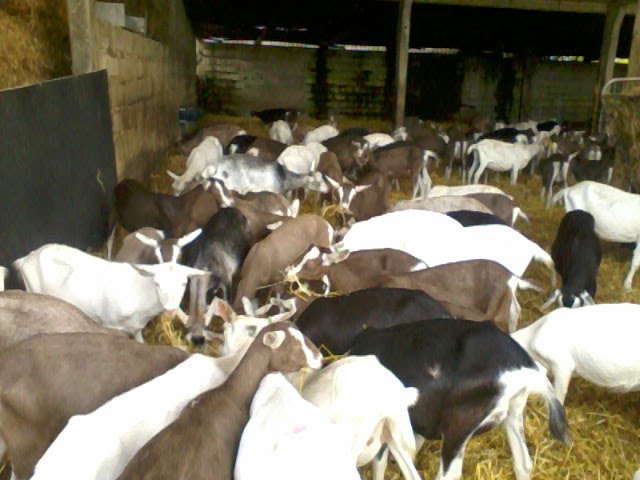 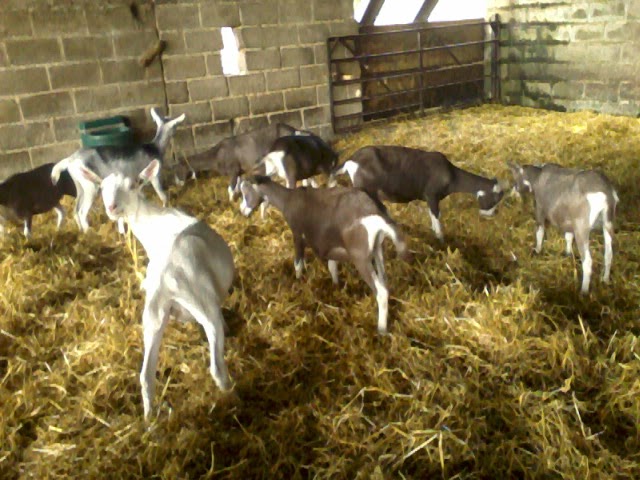 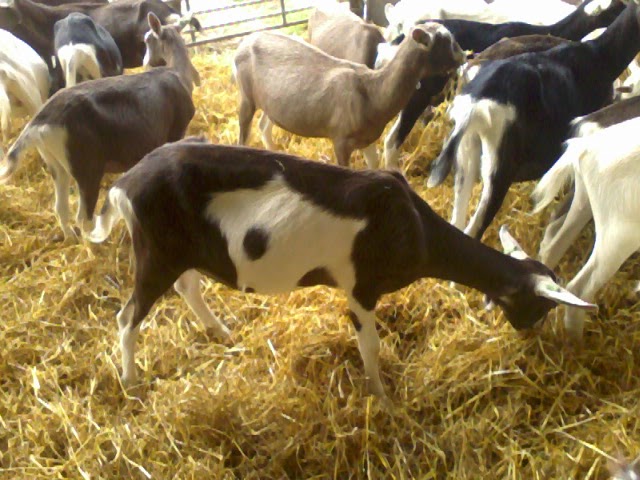 We will be keeping a few of them. Ones that are special to us for various reasons (like my little 'caravan' girl who spent 3 weeks living in a box in my caravan - remember??), or ones which are still quite small and aren't really up to standard.  And, needless to say, Fizzy won't be going anywhere!!

Dear old Betty goat decided to take herself out into the field during milking one evening this week.  For some reason, noone else went with her and so she just stood on the mountain all by herself.  Seemed perfectly happy! 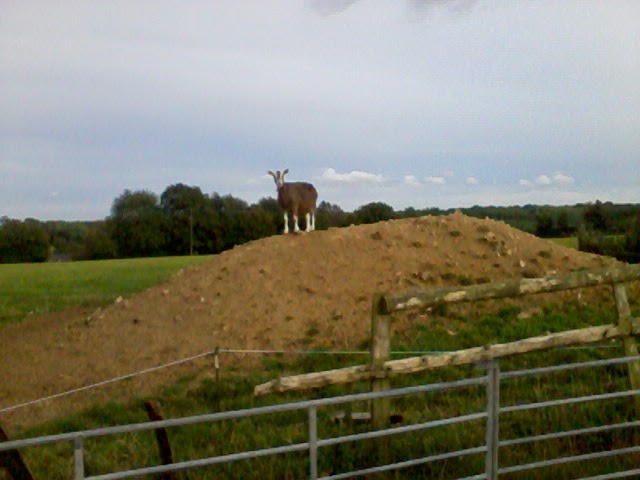 And yesterday, the tractor was put to a different use as our milk bottle delivery couldn't make it down the lane as the lorry got stuck under the low branches.  The driver did try his best but had to admit defeat as the cavalry (aka David) were called in ..

The little stud boys and some of their friends have all settled in well in their new accomodation in the outside cattle yard .. but today they were joined by their dads and uncles as the Big Boys were moved outside as well.

Although it is still quite early for the girls to be coming into season, there seemed to be an inordinate amount of unauthorised 'activity' this morning amidst rather a lot of gobbling and macho posturing!  And so The Boys were whisked outside rather quickly!

Max muscled in with the little chaps: 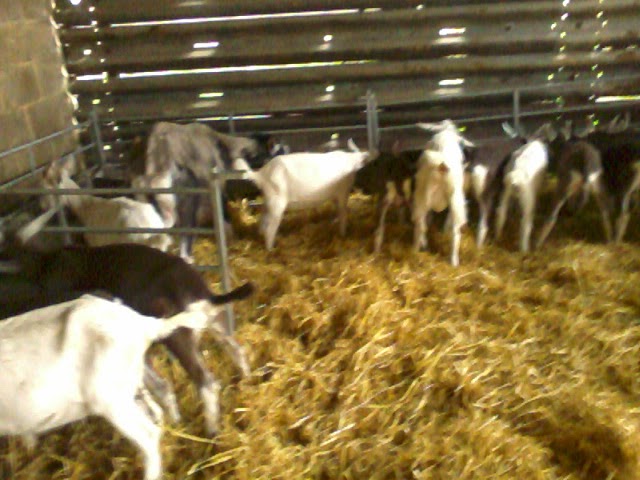 whilst Beamish, Hugo and Daramac (and one little chap) all stayed together: 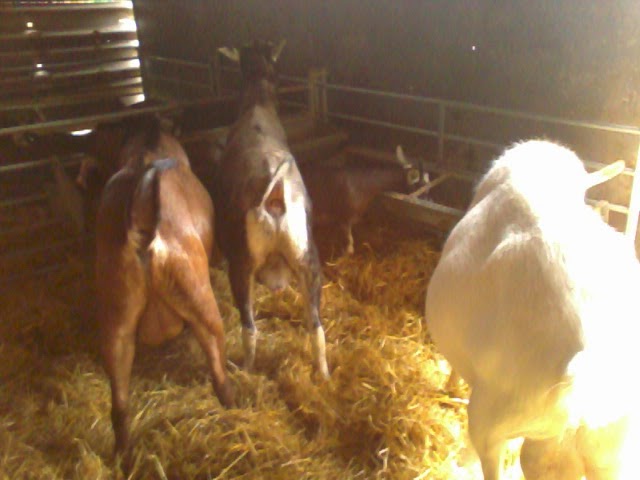 and a crowd of the little men all piled into the same feed trough! 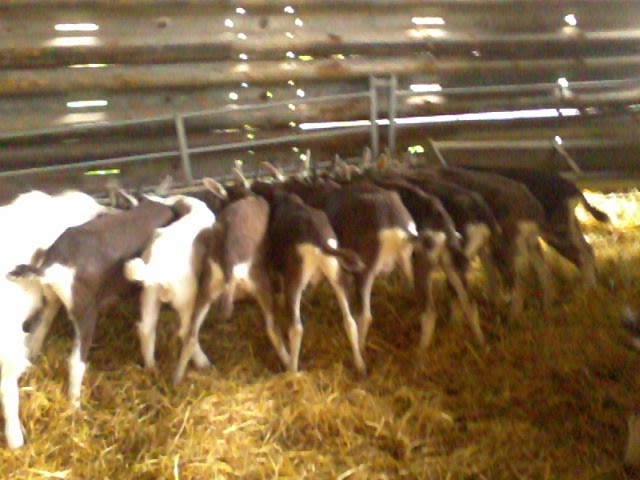 The big boys are very gentle with the youngsters and everyone is quite happy living out there together.  Soon it will be time to move the boys back in with their specially selected ladies .. hopefully Hugo will work this year!

We do still have a few new kids waiting to arrive .. we called our scanning man in last week just to check over a few of the late expectant mums.  Many were empty but there were a handful in kid, so we are expecting a few new babies at the end of this month.  Excitement once again!

Saturday 11 July
Alton (Hants) Farmers Market
10am - 2pm
Sunday 12 July
Winchester Farmers Market
9am - 2pm
**Middle Brook Street Car Park**
Currently, all our London and Hampshire Farmers Markets are running but with very strict controls on social-distancing and crowd numbers. Our stall may not be in its usual place so please come and find us!