Do you remember Polly?  The exceedingly naughty goat who constantly misbehaved in the milking parlour?  Well, poor Polly has been seriously ill for the past few days and we were afraid that we might actually lose her.

Heavily pregnant but seriously ill, we were torn between giving Polly drugs that could save her but may potentially harm the kids.  It was a tough call but one that we had to make.  With only a couple of weeks left until her due date, we had to hope that the little ones were strong enough to cope with the powerful drugs that we had to use.

Hopefully, we have managed to pull her back in the nick of time as she has started to show signs of recovery and was eating and drinking well this morning.  She had been sharing a pen with Valerie (she of the exceedingly dodgy leg), but this morning Polly decided that she would prefer to have a house of her own and started to try and get Valerie to move by nibbling her ears.

As David and I watched Polly, we both came to the conclusion that she was acting like she might be going into labour.  But she was not due until 4th March.  But, to keep her happy, we moved Valerie to another place and left Polly on her own - just in case.

Less than an hour later we had this: 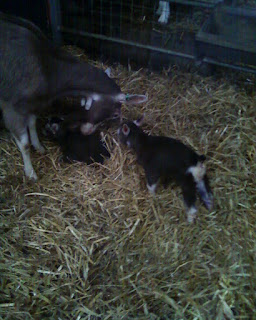 Yes indeed ... the first two babies of 2013.  Polly delivered two beautiful little girls and they seem to be absolutely fine, despite their early arrival!

As the weather was bitterly cold today, David decided that the little premature babies needed to have a shelter and so he set up a nice wooden crate for them, full of straw: 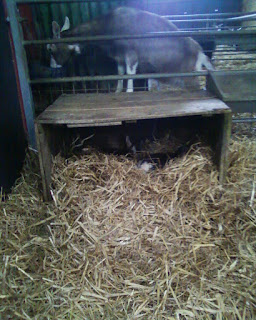 Polly seems to be doing pretty well, despite being so ill and has been very attentive to her babies.  She has a little milk which they have gulped down but by tonight she was empty and so we had to top them up a bit with some emergency colostrum that we had in the freezer.

She also looked a bit tired and cold this afternoon and so she is now wearing one of my old fleeces with the arms cut out.  We have used it before for poorly goats and it works really well.  Keeps them nice and warm and stays on, even when they move around.  Works a treat! 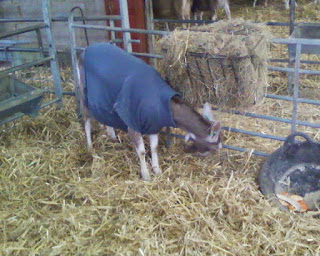 And just to give you some idea of how tiddly these new babies are ... here's David cuddling one of them .. 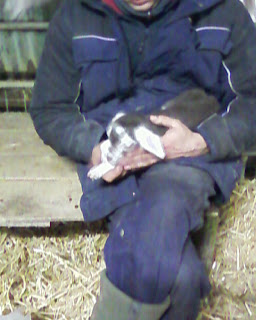