A potted history of Ellie's Dairy

After chatting to a few customers at Wye Market this morning, I got to thinking about how we actually started producing milk and cheese here at Ellie's Dairy and, while it's relatively quiet on the goat front, I thought I would do a little blog about it for those who are interested. 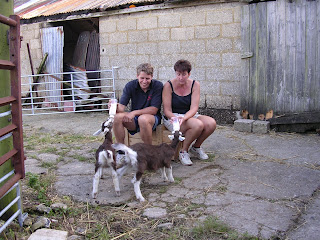 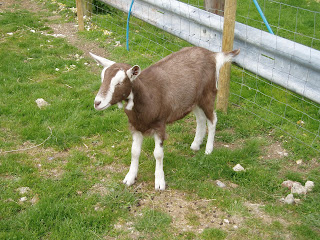 Ellie
﻿
﻿They were closely followed after a few weeks by Thelma and Daphne.


All were kids, and so we did not milk our first goat until Thelma kidded on 26 Feb 2006.  Daphne kidded a couple of days later and they were both exceedingly patient as we tried to milk them by hand.  Although David and I can both milk by hand, we decided that we would get ourselves a portable milking machine to speed up the process. And here it is - all shiny and new in the newly built milking parlour. 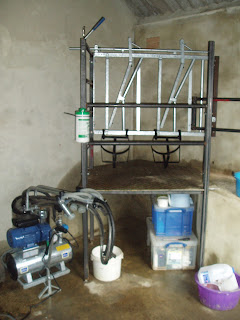 And, believe it or not, that was what we used until August 2011!  We used to milk almost 100 goats coming through the parlour 2 at a time ...  So, you see why we were SO pleased to get the new parlour milking 12 at a time.

We did not start selling the milk until January 2008 - until that time we didn't really have enough to sell and it took us a while to get all the dairy and equipment sorted to a point where we could be licenced by the local EHO and Trading Standards.  These were the very first bottles we sold to Macknade Fine Foods in Faversham on 26 Jan 2008 (centre of pic with white lids): 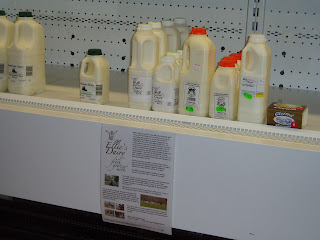 I know it probably seems odd to have taken a photo of this but this was a HUGE step forward for us.  You can't believe how excited I was to put those first bottles on that shelf!

Before we starting selling the milk properly, we drank it ourselves of course. Previously, we had only ever tasted mass-produced supermarket milk and neither of us liked it very much at all.  I can remember the very first time that we tasted our home-produced milk. Standing in the dairy, we had a small mug of milk each and neither of us wanted to be the first to try it.  We both screwed up our faces in anticipation of something really horrid ... and then both of us burst out laughing and said 'actually, it's pretty good really!'.  We were so surprised by the taste - fresh, creamy and not goaty in the slightest.  Amazing!!! Even to this day, we have managed to maintain this freshness and flavour, as all our customers will testify.  I think it has to be a combination of how we look after the goats and what we feed them.

We also dabbled with cheesemaking in my kitchen. Here's a pic of David taken in 2007 with our first ever cheeses in their moulds: 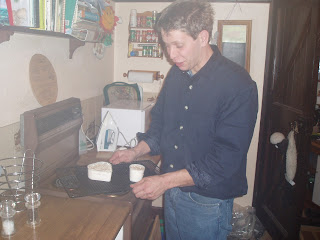 Of course, we didn't have a clue what we were doing and although it looked like cheese, it tasted awful!
Eventually, we produced enough milk to make it worthwhile doing proper batches of cheese and so we enlisted the help of the relatively new Kent Cheese Company (George Jessel and Geoff Parker) to make our cheese for us as we didn't have the equipment or experience to do it ourselves.
This arrangement worked very well for all of us until Geoff retired at the end of 2009 and I was suddenly thrown in the deep end and had to start making it all myself!  I had been tutored by Geoff and had some idea of what I was doing but it's a bit daunting to suddenly be left on your own with 200 litres of your precious milk heating up in a cheese vat! 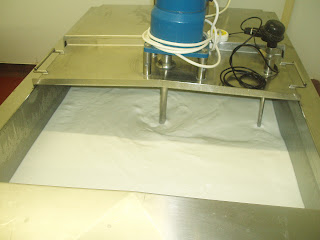 And the rest, as they say, is history.  We've come a fair way since those two little moulds in 2007: 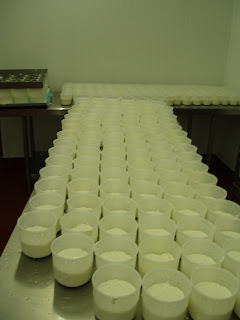 I now make goat's cheese once or twice a week (sometimes more at busy times) and I have also invented a couple of yummy new cheeses along the way.  But, I am still very much a novice cheesemaker though and there is always so much more to learn.  It's a never-ending experience.  And, yes, occasionally it does go exceedingly pear-shaped for no apparent reason!!  And there are also those occasions when you leave your brain outside the cheese room.
Any cheesemakers amongst you will know that leaving your paddle stirring when you add the rennet is not a good thing.  For the non-cheesemakers amongst you - adding rennet causes the milk to clot and form curds.  This happens in complete stillness ... Stirring the milk at this point is therefore not a good thing and so, having left my brain some distance from my cheese vat, I ended up with a vat full of something that closely resembled scrambled egg.  Believe me - you only do it once!